When did the Second World War start? On the surface this question is too easy even for a pub quiz. In the UK, most are familiar with Neville Chamberlain’s radio address on 3rd September 1939 dolefully telling the nation that the Nazi invasion of Poland had forced the British government to stand by its promise to declare war on Germany. In the US, the memory of the Japanese attack on Pearl Harbour on 7th December 1941 is etched even more starkly onto the national psyche. But from the perspective of the myriad black people living in London – many of whom were drawn from across the world – do these starting points make sense? This post looks at the challenges of periodization and how the Mapping Black London project goes about solving them…

Europe was on the brink for some time before September 1939. Nazi Germany had been rearming for much of the decade: the Rhineland was remilitarized, then Anschluss brought Austria into the German Reich. Czechoslovakia was dismembered soon after and, although Chamberlain proclaimed the Munich agreement with Hitler in 1938 represented ‘peace for our time’, the policy of appeasement was unravelling before people’s eyes. The war duly came late the following summer.

But from the perspective of certain anti-colonial activists in London, another fight was already underway. The First World War made arguments against racism and empire louder than ever. Thousands of colonial troops were directly involved in the fighting but looked on angrily during the interwar period as victorious European powers used the Versailles settlement to extend their overseas territory. An even more important recent event took these protests to another level. The Italian invasion of Ethiopia in 1935 is often seen as a mere introductory footnote to the European conflict, but the short-lived war in east Africa transformed the way many non-whites in Africa, the Americas and Europe looked at the world and their place within it.

Take, for the example, a group formed in London called the International African Friends of Ethiopia: its leaders included Jamaican Amy Ashwood Garvey, Trinidadian C.L.R. James and Guyanan Ras T. Makonnen – all of whose important wartime stories can be traced through the map. For this group and others that followed, the war against fascism began in 1935, not 1939 or 1941. And it was not just a battle of force but also a fight against the colonial ideas used to justify so much of global affairs.

So when did the war end? From certain perspectives, the war was never just about the fight in Europe. And when it came to planning the post-war world, it was not just the comparatively well-known meetings at Yalta and Potsdam that were important.

Consider, for instance, two other meetings in 1945: the first was held in San Francisco in June 1945, where 46 countries came together to sign the founding charter of the United Nations (UN).  Although the victorious allied powers dominated the meeting, the UN’s founding principles – soon to be enshrined in its Universal Declaration of Human Rights – had a special resonance for black peoples across the world. In the US in particular, a growing number believed the causes of civil rights and human rights were part of the same global fight, a point embodied especially clearly in the career of Ralph Bunch. As we know, these fights were only just beginning.

Meanwhile, four months later, another group of black activists came together for a different meeting: the Fifth Pan-African Congress held in Chorlton-on-Medlock Town Hall in Manchester, England. The 90 attendees read like a ‘who’s who’ of the international black radical movement galvanized a decade earlier by the Italian invasion of Ethiopia. W.E.B. Du Bois came over from the US, while Amy Ashwood Garvey returned from Jamaica. African leaders were also represented, including the future leaders of independent Kenya and Ghana, Jomo Kenyatta and Kwame Nkrumah. Despite their different backgrounds and disagreements about how independence should be achieved, the delegates agreed on the need for full and immediate freedom for colonial control. If we add to that the larger geopolitical disruption of European empires in 1945, we can see why many historians argue the seeds for independence were all sown in wartime. Stopping the story abruptly in 1945 causes some problems from this perspective too. 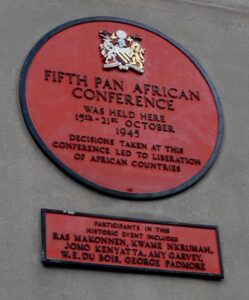 A plaque commemorating the Fifth Pan African Conference in Manchester, an event part of a larger and longer history of international anti-colonial activism.

At the same time, every story needs a beginning and an end, and every historical project needs to decide where to start and finish. Mapping Black London in World War II aims to record everything that happened in London between 1935 and 1947. In other words, we examine everything between the Italian invasion of Ethiopia which represented for some (but of course not all) the start of the international fight against fascism, until just before the arrival of the SS Windrush in 1948, without losing sight of the fact that the London experience was shaped heavily by the outbreak of war in 1939, the arrival of US troops after Pearl Harbour, and the end of the war in 1945.

Some historiographical considerations also come into play: we know a fair amount about post-war immigration, so going up to 1947 allows us to ‘plug in’ to this better known part of the story and, eventually, consider how these different era might be connected – or disconnected. The multiple messy threads of history mean no periodization is perfect, but capturing experiences between 1935 and 1947 is designed to allow us to untangle at least a few more important strands.