The Second World War is hardly under-studied, to put it mildly. But there’s still a tendency to marginalize black people – as diverse a collection of individuals and communities as could be imagined – or skip them over altogether. This post delves into the reasons why the Mapping Black London in World War II project was set up, what we know so far thanks to other historians, and where there’s still more work to do…

The last few years have seen increased attention to the history of black people in Britain, including through initiatives like Black History Month, Black British History and new programmes at universities.

Yet it’s also fair to say that, as far as the public imagination is concerned, Britain’s modern multicultural racial history is largely seen as a post-war phenomenon.  The arrival of the SS Windrush at Tilbury Docks in 1948 remains at the heart of well-worn narratives of post-war immigration, with recent deportation scandals surrounding Caribbean migrants and their offspring testifying to the enduring political relevance of these events.

The purpose of this project isn’t just to bust the myth that black British history began with the Windrush, however, and nor do we want to downplay the tremendous transformations that occurred in the 1950s and 1960s. Instead, we want to create a fuller, more satisfying and altogether richer account of black people’s diverse historical contributions during one seminal moment in that longer history: the Second World War.

Because, if we take a quick look at the pioneering work that’s already been done to extend the timeline, we find a field where we know lots about certain groups and individuals but surprisingly little about other important subjects. Consider, for instance, Peter Fryer’s Staying Power, a work published in 1984 that remains a landmark in the field. When it came to the 1930s and 1940s, Fryer placed certain energetic groups of anti-colonial protesters centre-stage, including Trinidadians George Padmore and C.L.R. James and organizations like the International Africa Service Bureau (IASB). Soon after, other scholars like Graham Smith and David Reynolds examined how American and British policies, people and prejudices collided in the turbulent war years – especially after the US arrived on British shores with a segregated army in 1942.

More recently still, a younger generation of scholars like Imaobong Umoren and Mark Matera have broadened the picture. From the perspectives of intellectual and cultural history in particular, there has been growing recognition of women’s important roles in these activist networks, including peripatetic people like Amy Ashwood Garvey and Una Marson.

But what about where these activities took place? Existing work already paints London as a crucial focal point in a chapter of history with an international sweep. But with some exceptions, the city has often been treated as a setting for people and events rather than as something that actively shaped – and, in turn, that was shaped by – historical events unfolding at local and global levels. And the cast of characters we know most about is still drawn heavily from the activist-intellectual left. Without dismissing these groups, we know less about (with important exceptions like the work of people like Stephen Bourne and aficionados of the black British jazz scene) black Londoners in other more ‘every day’ settings like factory work, hospitals, cinemas, theatres and air raid defence.

So there’s more to be done: the war between Allied and Axis powers was a global conflict in every sense of the word and black people from across the world were active parts of this history. The aim of this project is to collate existing scholarly work alongside a raft of new primary research to allow researchers and the public to uncover hidden ways in which London influenced, and was moulded by, diverse black people. The end result, we hope, will allow us to rethink key dimensions of a war we think we know so well. 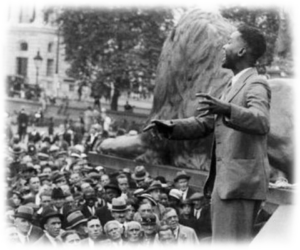 Trinidadian Marxist and anti-colonial activist C.L.R. James speaks at a rally protesting the Italian invasion of Ethiopia in Trafalgar Square, 1935.