Accused of being a ‘little Jim-Crow hostel’ by the Trinidadian writer George Padmore, Aggrey House was an institution founded by the British government to offer temporary accommodation to black students in London. Throughout the nine years of its existence from 1934 to 1943, the House was torn between its twin founding missions to both support black students in London and promote the aims of the British government…

In the mid-1930s, the London-centred West African Students Union, or WASU, formed a hostel – informally known as Africa House – in Camden. Africa House proved to be very popular, functioning as a hub for hundreds of Africans passing through London. Observing the success of Africa House, British government officials sought to create their own hostel in which black students could be encouraged to adopt particular mannerisms and thoughts – including loyalty to the Empire. The result was Aggrey House, situated on Doughty Street in Holborn, next door to where the Charles Dickens Museum stands today: 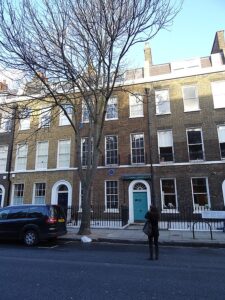 Image of Charles Dickens’ former home on Doughty Street, London. Aggrey House was the building on the left.

The warden of Aggrey House was Ivor Cummings, a Briton who would rise through the ranks of the Colonial Office as a welfare officer for black people in the UK who later become vital in welcoming the Windrush generation to Britain. Born to a white British mother and a black Sierra Leonean father, Cummings self-identified as black and was one of the few black officials in the British government at that time. An erstwhile promoter and defender of black civil rights, the fastidious, middle-class Cummings was also deeply distrustful of communism, an opinion he shared with another supporter of the hostel, Jamaican Dr. Harold Moody. The pair’s anti-communism led them to dislike WASU and fear that Africa House was a site of radicalism and subversion.

The feeling of dislike was mutual. Upon the founding of Aggrey House in 1934, WASU released a pamphlet covering ‘the truth of Aggrey House [and the] government plan to control African students’. Open opposition to Aggrey House from WASU continued until the financial difficulties of the latter in 1935 led to the two hostels participating in a series of ‘peace talks’. After this, an uneasy peace developed between Aggrey House and WASU, punctuated only by the occasional barb thrown by one side or another.

In the meantime, Aggrey House began to flourish. By 1937, membership at the hostel had more than quadrupled, reaching 236 residents. As well as African students, Carribean students and African-Americans also spent time at Aggrey House. Long-term London residents such as the Kenyan Jomo Kenyatta also visited friends there. By creating a black space, the British government had indirectly made Aggrey House a site where a joint black identity could be fostered between people with disparate national origins. This process was accelerated by the debating clubs and study groups which were formed at the hostel and in which current affairs in the colonies were discussed. Talks were also given at the hostel by radical thinkers including Trinidadian writer George Padmore.

It was becoming clear to the organizers of Aggrey House, including Cummings and Moody, that keeping a lid on the political aspirations of the membership was becoming impossible. Matters came to a head in 1940, when the Aggrey House board temporarily closed the institution. The reason for this decision was stated to be the ‘immoral conduct’ of a certain Mr. Wilkins, a Caribbean student who had supposedly introduced a sex worker into the building and thus brought it ‘into disrepute’. Under the surface, however, conservative members of the board, spearheaded by Moody, used the sex worker incident as an excuse to permanently ban suspected communists (as well as the unfortunate Wilkins) from Aggrey House.

The hostel was cautiously reopened; African-American reporter Ollie Stewart visited in 1942 and met with students from Africa, the Caribbean and India. Nonetheless, by 1943 it had closed its doors permanently. As a replacement, a new ‘Colonial Centre’ was opened on Russell Square in 1943, but this site never saw the levels of political activity that the Aggrey House did. Times had changed – stories from the Colonial Centre mention Christmas parties, services for African-American GIs and meetings with local children as opposed to talks on independence. Moody had achieved his vision of an apolitical black space just as his own politics began to take a more radical turn: in a twist of fate, the doctor spent his final years campaigning for a centre free from the influence of the British government.

Aggrey House never achieved the international reputation of WASU’s Africa House, and it has been largely perceived by historians as a failed experiment. Nonetheless, for a brief period between 1935 and 1937, the hostel appeared to be in a much healthier state than its more famous counterpart, boasting a higher membership and a firmer financial footing (something WASU never enjoyed). The fact that figures such as George Padmore and Jomo Kenyatta chose to visit and speak at Aggrey House speaks to the pull of the institution in the networks of black London at the time. That the black members of the hostel’s board were not radicals does not detract from its importance; rather Aggrey House offers a glimpse into an alternative vision for black London, in which the colour bar would be dissolved while imperial loyalties would remain intact.